A couple of posts ago we gave a brief introduction to some of the legends of Rockabilly drumming as well as introducing The Wheelgrinders’ drummer, Stuart. We’ll elaborate on Stuart’s approach to drumming and his storied career behind the skins in a future post.

Following in that same vein we thought we’d switch our focus to the great Rockabilly bass players for this post….the legends who pioneered the slap bass sound that is synonymous with Rockabilly and who slapped, rode and spun their instruments to Rockabilly sainthood. We’ll also introduce our own High Priestess of the Low End, Caroline Helmeczi, who provides the rock steady thumping slap bass that is the Yin to Stuart’s drumming Yang (or vice versa) in The Wheelgrinders’ rhythm section.

Let’s start by going all the way back to Fred Maddox of The Maddox Brothers and Rose. Fred is the guy who was idolized by future slap bass legend, Bill Black. Bill is often credited as being right there at Rockabilly/Rock ‘n’ Roll ‘Ground Zero’ on a balmy July night in Memphis with his buddies Scotty Moore and a certain Mr. Elvis Presley, but Bill would have been quick to point out that his style of playing came directly from Fred Maddox.

Starting in California in 1939, Maddox Brothers and Rose quickly rose to prominence as “…the nation’s premier hillbilly band”. Although not pure Rockabilly as we know it, their upbeat high octane version of Country music, fueled by the percussive slap of Fred’s bass laid the groundwork for the slap bass sound that future Rockabilly bassists adopted.

Two slap bass players who are rarely mentioned alongside the more exalted Rockabilly Bull Fiddle slingers are Al Rex and Marshal Lyttle of Bill Haley’s Comets. Listen to the early Comets’ material and to their work when they were known as The Saddlemen and that distinctive rhythmic clicking of the bass strings that permeates every song. That percussive slap came from Al Rex who joined the Comets in 1949 and was then replaced in 1951 by Marshal Lyttle who followed on where Rex left off, after a few bass lessons from Bill Haley himself. It’s Marshal who is slapping away on the immortal “Rock Around The Clock”. When Marshal quit the Comets in 1955 he was replaced by none other than Al Rex! Obviously ol’ Bill Haley was partial to slap bass in his band. Both Al and Marshal were pioneers of all sorts of stage gymnastics with their uprights…a tradition which lives on with today’s Rockabilly bassists.

Bill Black of course needs no introduction. As one half of The Blue Moon Boys he was a contributing factor in launching Elvis Presley’s career. Bill, along with Scotty Moore, was a member of The Starlite Wranglers, a Western band out of Memphis TN and he followed in the tradition of Fred Maddox and the many bass players in Country and Western groups whose designated role was not only to provide the rhythm (this at a time when few Country bands employed a drummer and drummers were banned from the stage of the Grand Ol’ Opry) but also to be the clown of the outfit, often wearing ‘Hayseed’ hillbilly costumes and generally goofing around on stage. This all changed on the aforementioned balmy July night in Memphis in 1954 at Sun Records when Bill followed Elvis’ lead in performing a hopped up version of Arthur “Big Boy” Crudup’s “That’s Alright” and slapped the crap out of his Kay Concert Series bass and into the Rockabilly/Rock ‘n’ Roll history books.

Marcus VanStory, known as the “Slap Bass King” was right there helping define the Rockabilly sound at Sun Records in the 1950s, recording and also touring with the legendary Warren Smith. The actual accounts of who played bass on which Smith session is a bit sketchy but it’s widely assumed that it’s VanStory on “Ubangi Stomp”, “Miss Froggie” and “Red Cadillac and a Black Mustache”…all Rockabilly classics!

No history of Rockabilly slap bass players would be complete without Dorsey Burnette. Dorsey, the brother of Johnny Burnette, grew up in the Lauderdale Courts housing projects of Memphis TN alongside a young Elvis Presley. Dorsey and Johnny blazed a legendary trail in the annals of Rockabilly history when, along with guitarist Paul Burlison, they moved to New York City early in 1956 and appeared on, and won three times in a row, the Ted Mack Original Amateur Hour. This led to a recording contract with Coral Records and arguably the greatest Rockabilly album of all time “Johnny Burnette and the Rock ‘n’ Roll Trio”.

…and back to Sun Records for our next slap bass pioneer, Marshall Grant. Marshall was the rhythm half of the Tennessee Two, with guitarist Luther Perkins, who backed the great Johnny Cash on all of his Sun Records classics. An integral part of the ‘boom-chicka-boom’ sound of this trio, Marshall can be heard on everything from “I Walk The Line” to “Big River” to “Hey, Porter!” and “Get Rhythm”.

There are of course many more slap bass players, well known and obscure, who helped shape the Rockabilly sound from the 50s all the way up to the present day. Bassists like Lee Rocker, Pete Turland, Keith Picot of Cousin Harley, Johnny “Spazz” Hatton and Slick Joe Fick are keeping the tradition alive, as is our very own Caroline Helmeczi. 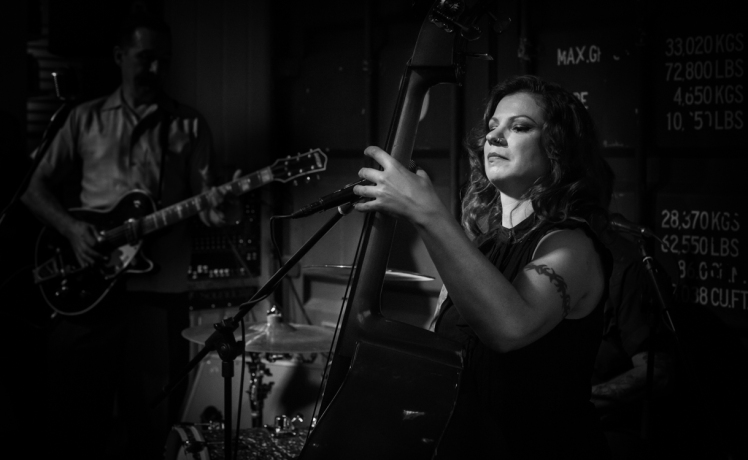 Caroline started out on bass guitar at 13 years of age and first played the upright at 17. She began playing Rockabilly slap style at 24 and went on to hone her style and pay her dues recording and touring Canada, the US and Europe with Big John Bates’ band. She currently plays a 1990s Czech Strunal 3/4 size plywood bass which Caroline says has given her no trouble with feedback, even at very loud stage volumes, and can take a beating…an important attribute for a bass in a Rockabilly band!

Caroline has used Innovation Rockabilly nylon strings for years, but though she’s been happy with them, after playing a gut stringed 1940s Kay bass at The Wheelgrinders’ recent Sun Studios recording session she’s thinking of switching to the lower tension Innovation Silver Slaps. For a pickup she uses a Revolution Solo which transfers the natural sound of the bass and picks up the slaps without being too clicky.

When you come to a Wheelgrinders show, or listen to Caroline’s playing on our upcoming album, you’ll see for yourself the integral part she plays in the Wheelgrinders sound and stage show. From stellar vocals to bass spinning theatrics to jaw dropping slap solos Caroline’s the real deal. We’ll wrap up with a quote from the bassist herself on her approach to Rockabilly..

One thought on “Rockabilly Slap Bass”